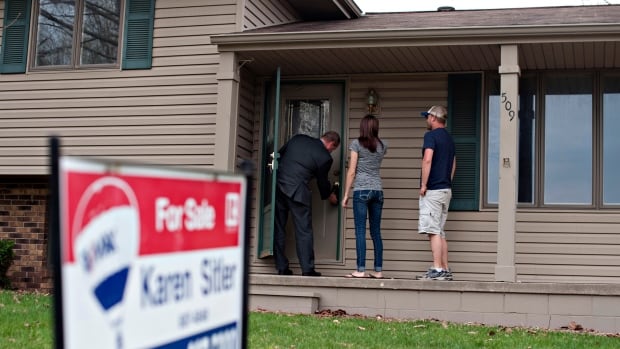 The average price of a Canadian home that sold in November was just over $500,000, CREA said Thursday. (Daniel Acker/Bloomberg)

Last month was the busiest November for home sales on record, despite a slowdown in activity in the Greater Toronto Area.

The Canadian Real Estate Association said Thursday that home sales rose by almost four per cent in November from the previous month. The months at the end of the year aren't typically a busy time for home sales, but the real estate group says sales are picking up, in part because buyers are rushing to get in before new stress test rules take effect in January.

Starting in January, all borrowers with uninsured mortgages must be stress-tested to make sure they could still pay down their loans if rates were higher. Anyone who fails the stress test will be prohibited from getting the loan they've applied for, and will have to either get a smaller mortgage for a cheaper home, or not buy in the first place.

"Some homebuyers with more than a 20 per cent down payment may be fast-tracking their purchase decision in order to beat the tougher mortgage qualifications test coming into effect next year," CREA president Andrew Peck said. "It will be interesting to see whether December sales show further signs of home purchases being fast-tracked."

The increase in home sales came without any help from Toronto's big market, where "activity remains down
significantly from year-ago levels" after the province moved earlier this year to implement new rules to crack down on speculators and foreign buyers.

On the price side, CREA's national house price index — which differs from a straight average — rose at a 9.3 per cent annual pace in November. That's the smallest increase since February 2016.

Across the country, the average price of a home sold on CREA's Multiple Listings Service during the month was $504,000. If the two big and expensive markets of Toronto and Vancouver are stripped out, the average house price drops by $120,000 to just above $381,000.

"The adjustment in the Toronto market is ongoing," Bank of Montreal economist Robert Kavcic said of the numbers, "but strong underlying supply-demand fundamentals should prove supportive next year once the remaining froth gets worked off."