The Town of Innisfil is known to most Ontarians as a collection of sleepy villages, cottages, and rural farmland, with rolling hills and a slice of Lake Simcoe shoreline providing picturesque landscapes. Located just south of Barrie and roughly 60km north of Toronto, Innisfil has a population of around 36,600 people spread across numerous small communities over 263 square kilometres, comparable in area to the City of Mississauga. But despite its relative obscurity, Innisfil has been making a name for itself in recent years by taking on some rather progressive urban initiatives that stand out amongst the traditionally conservative planning policies of Toronto and the GTA. As an example, in 2017, they struck a deal with Uber to provide local public transit services through publicly-subsidized fares, instead of implementing a bus network that might prove costly in the sparsely-populated region. 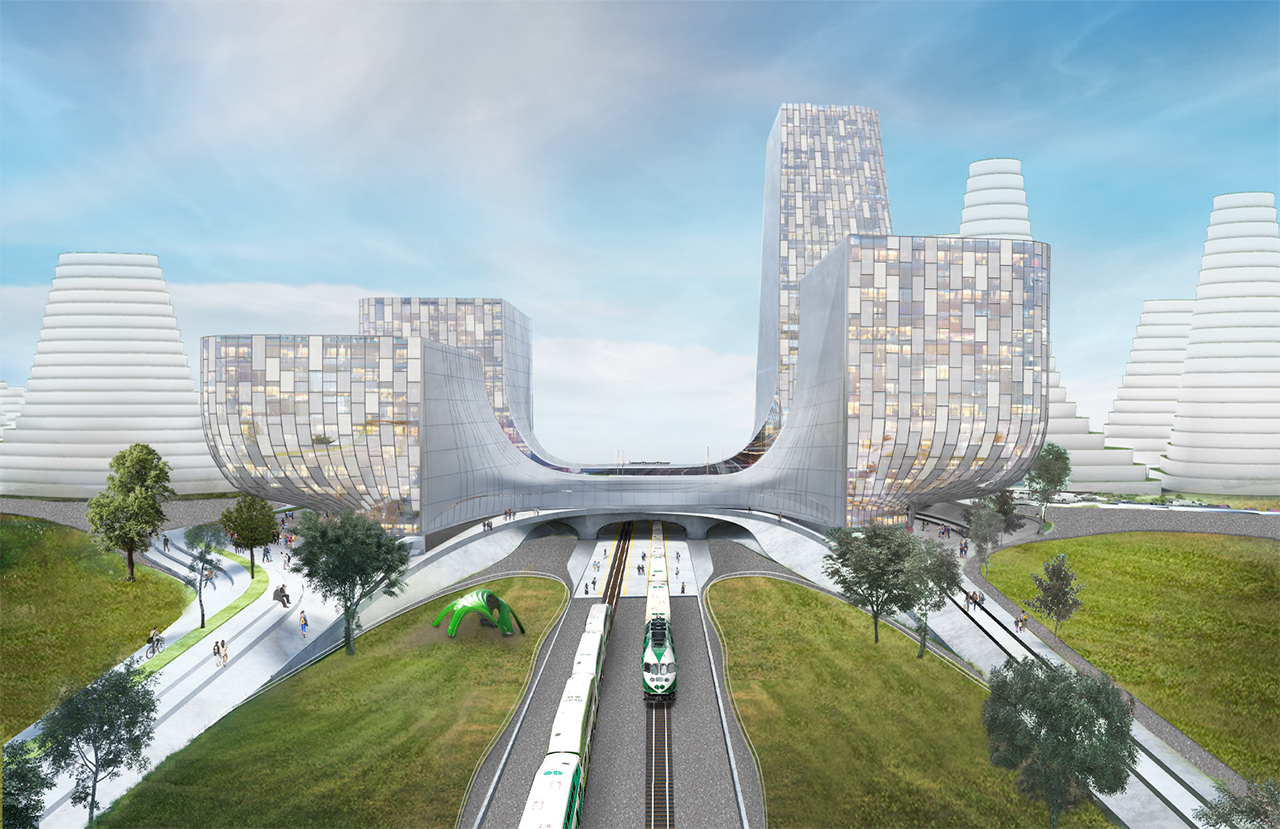 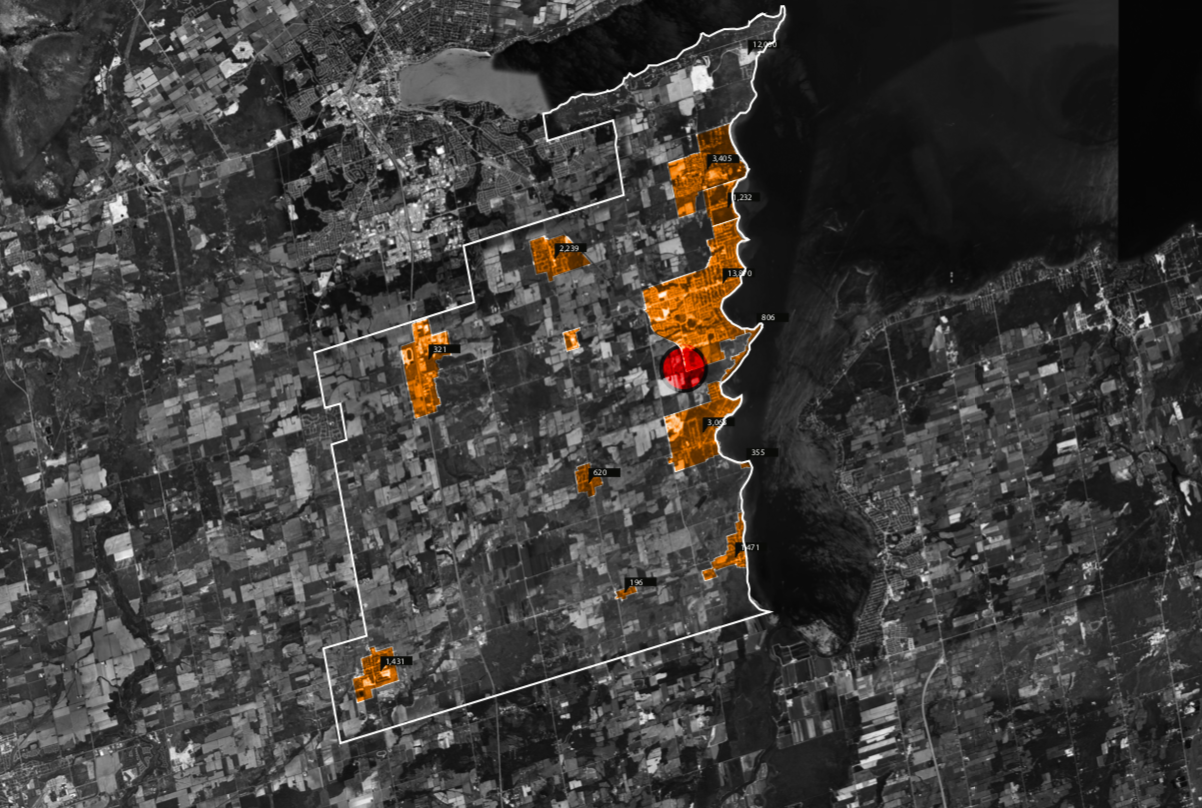 Map of Innisfil: orange areas are existing communities, red circle is the Orbit, image courtesy of the Town of Innisfil.

Now, the Town of Innisfil has taken another progressive step by fully endorsing a futuristic master plan for an entirely new community at the heart of the region. Dubbed 'The Orbit', the master plan is drafted by PARTISANS in conjunction with the Town's planners and seeks to establish a new city of up to 150,000 people centred around the future Innisfil GO train station, planned to be constructed as part of Metrolinx's ongoing expansion of their regional network. 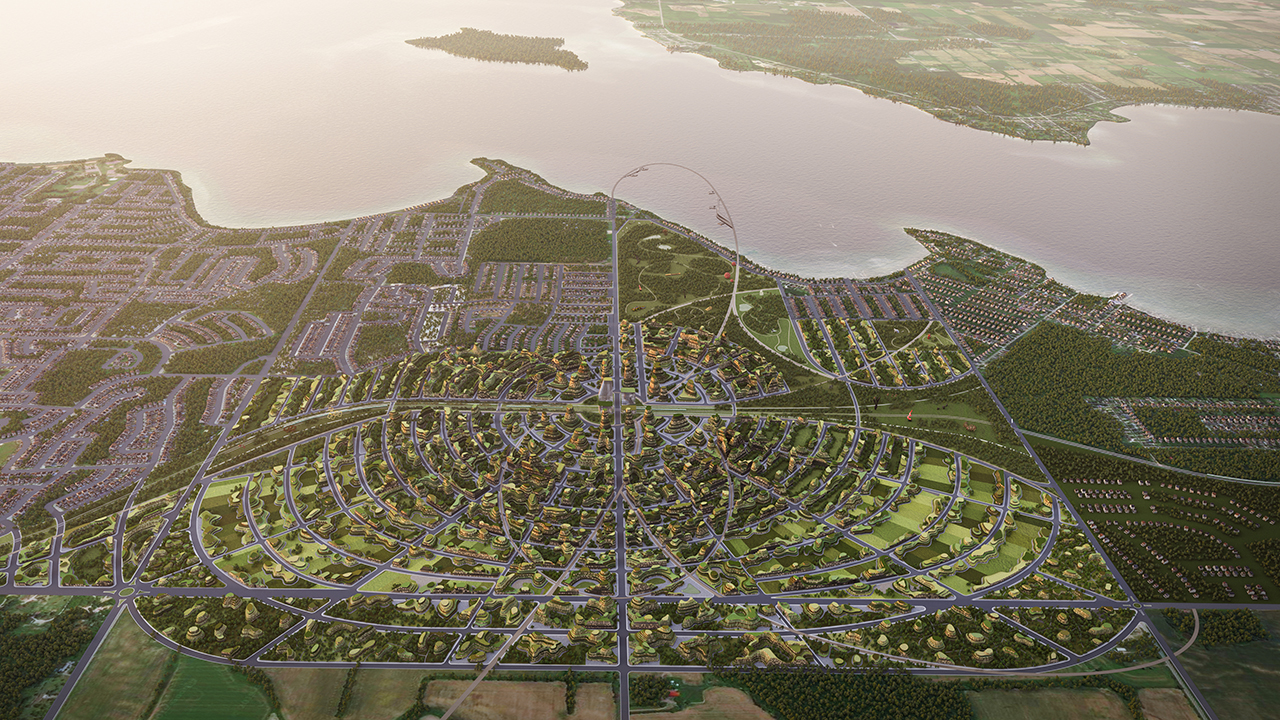 Arial view of the Orbit, image by Norm Li, courtesy of the Town of Innisfil.

The Orbit is far-reaching in its scope, proposing a complete transit-oriented mixed-use community with residential, commercial, institutional, educational, and community uses. The plan is designed to accommodate up to 40 million square feet of built space constructed incrementally as Innisfil grows over the coming decades. Situated roughly equidistant from Toronto and the Muskokas, Innisfil's growth is expected to accelerate rapidly in the coming years, particularly with the addition of a GO transit stop, as rising housing prices continue to push people out of the GTA. The Orbit is an experimental way to manage that growth in what PARTISANS and the Town of Innisfil are calling the city of the future. 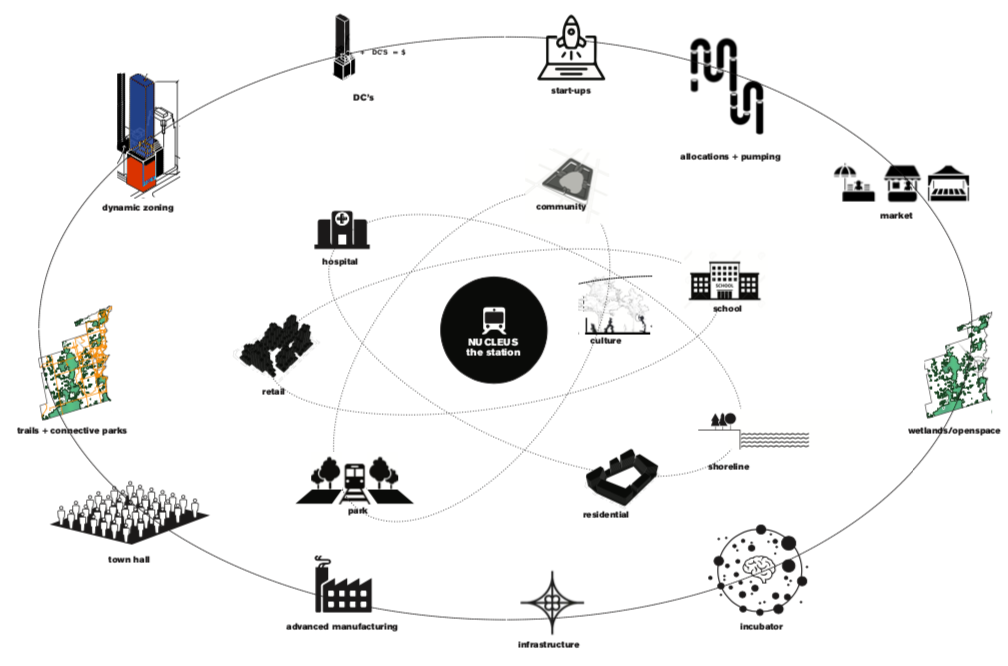 Diagram of the proposed and hypothetical Orbit components, image courtesy of the Town of Innisfil.

The geometry of the Orbit is complex yet simple. Beginning with the new transit station at its core, the plan radiates out in concentric circles that slowly morph into 'squircles' - a hybrid between a square and a circle - as a way to merge the existing rectilinear street grid into the new plan. The concentric rings allow the city to grow incrementally and in a more orderly fashion, maintaining as close proximity as possible to the GO station and major streets. Overlaid on top of the squircle grid are large swaths of parkland and large elliptical trails that radiate out from the transit node and back, connecting to significant natural features in the area. 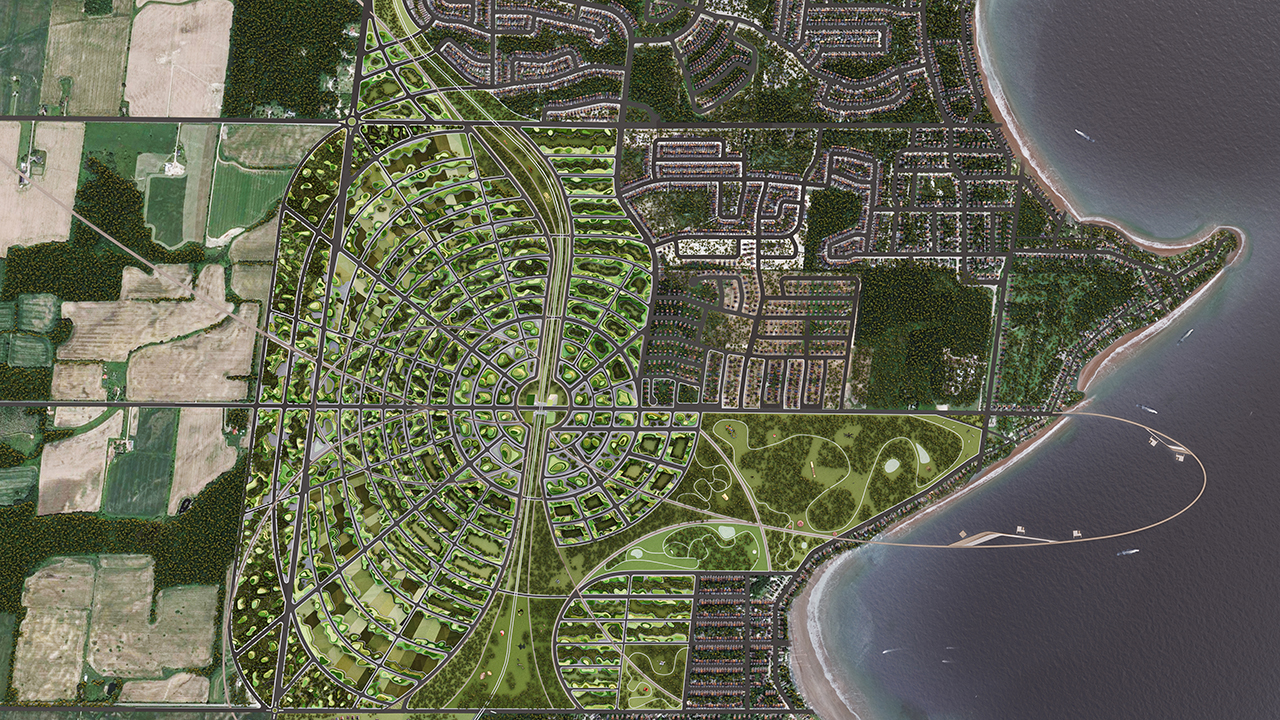 The Orbit master plan, image by Norm Li, courtesy of the Town of Innisfil.

The designers envision the Orbit as a hybrid between urban and rural living, dispersing higher-density built form across open green spaces intersected with nature trails and street grids. The plan is seen as an extension of Ebenezer Howard's Garden City movement of the early-20th century, merging contemporary urban ideals with the plan of a complete community surrounded by and integrated with nature. 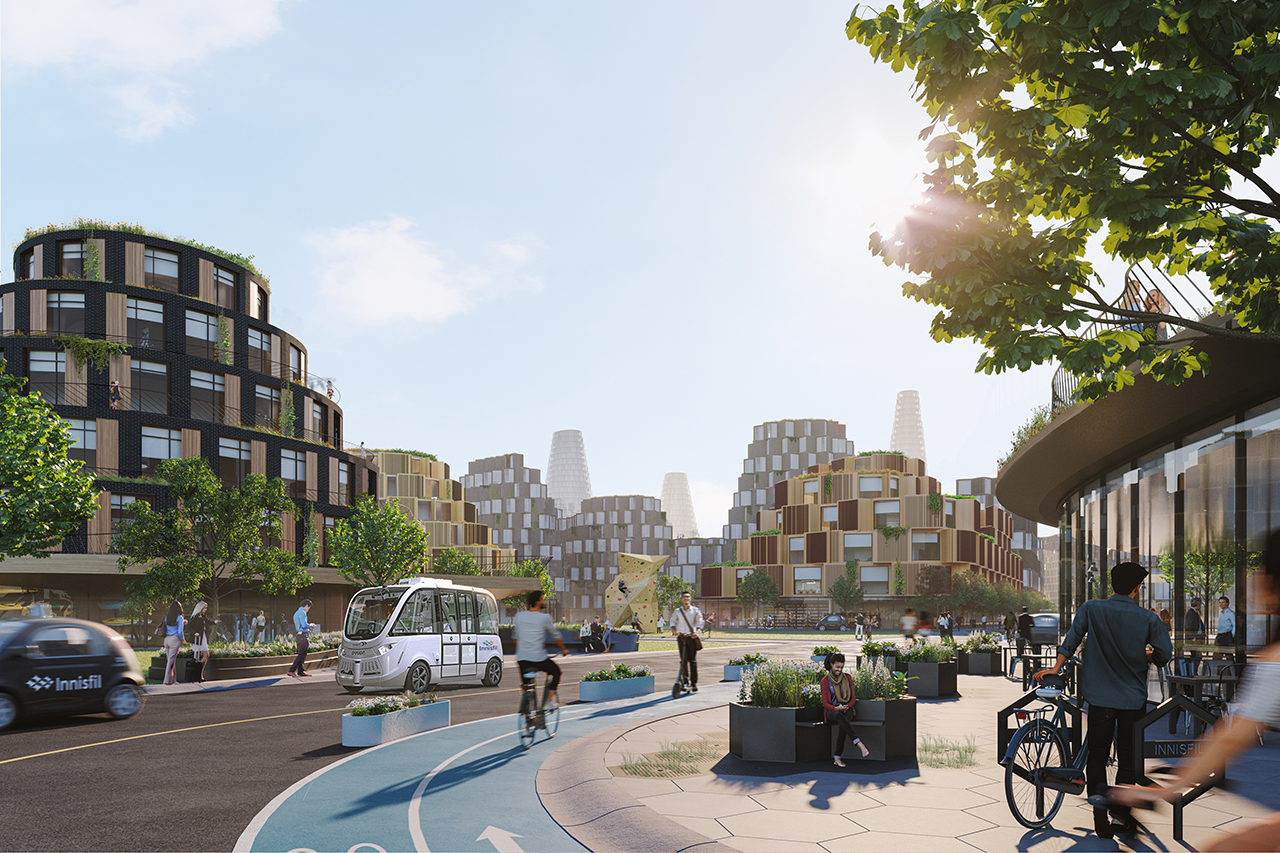 Conceptual rendering from within the Orbit, image by Norm Li, courtesy of the Town of Innisfil.

Slicing through the middle of the Orbit is the rail corridor, but rather than turning its back on the infrastructure, the plan proposes a 3.5-kilometre-long linear park running along both sides of the tracks. The linear park is intended to house a variety of programs to animate the typically forgotten space, with a sculpture garden, a marketplace, recreational trails, and playgrounds as examples.

In addition to the linear rail park and the smaller green spaces interspersed throughout, a large swath of land in the southeast corner of the Orbit is dedicated to parkland, connecting the rail park to Lake Simcoe as well as linking to the communities both north and south of the plan. 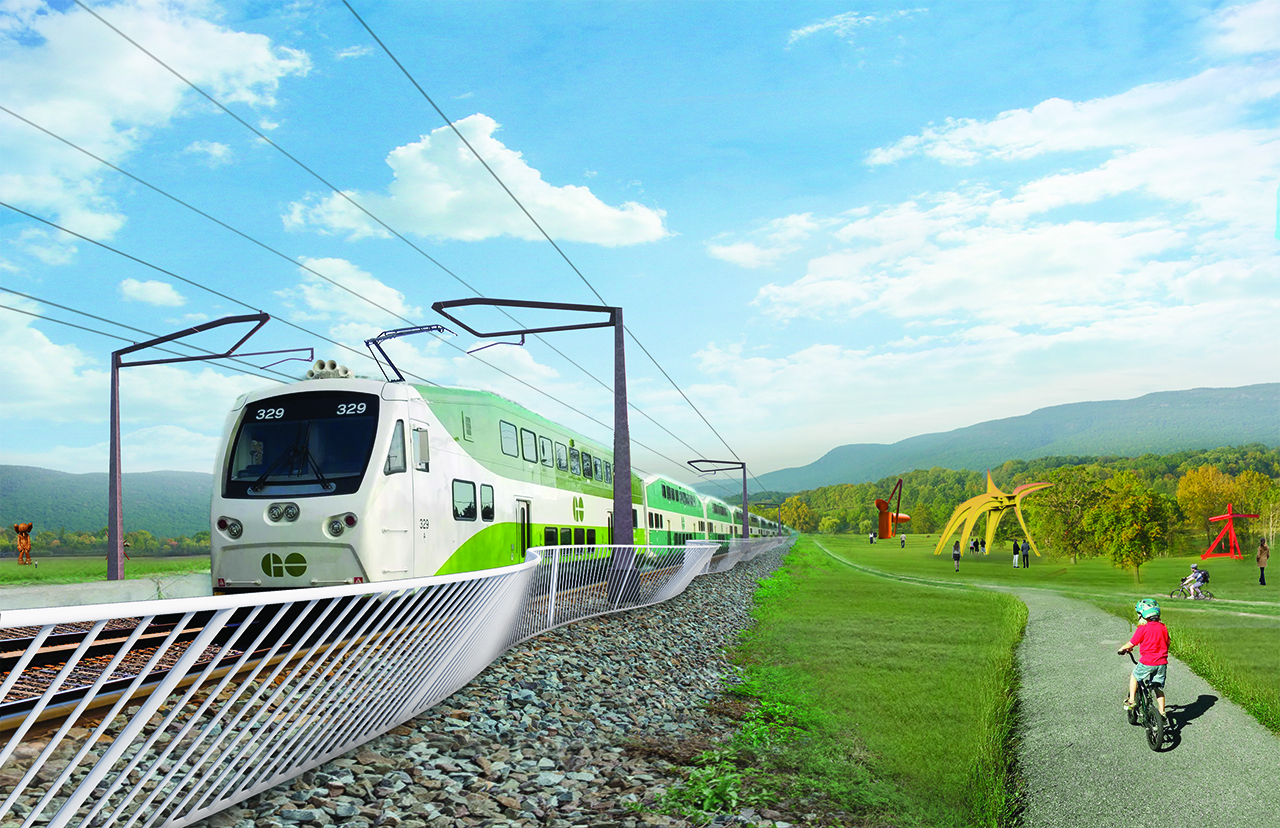 Rendering of proposed linear park along the rail corridor, image by Norm Li, courtesy of the Town of Innisfil.

Where the Orbit gets most experimental is in its built form. PARTISANS have proposed implementing dynamic zoning throughout the neighbourhood as a way to plan for future density. Dynamic zoning is a relatively new idea that proposes to automatically up-zone an entire area when a specific developmental condition is met. The condition illustrated in the document shows that when an area is 70% built out, the allowable density and building heights are automatically increased across the board in order to incrementally allow greater and greater density as the city grows. It also avoids rezoning individual properties when a density increase is warranted, instead updating the zoning concurrently as development progresses. This process repeats itself indefinitely unless a maximum limit on heights and densities is set by the local planning authority. 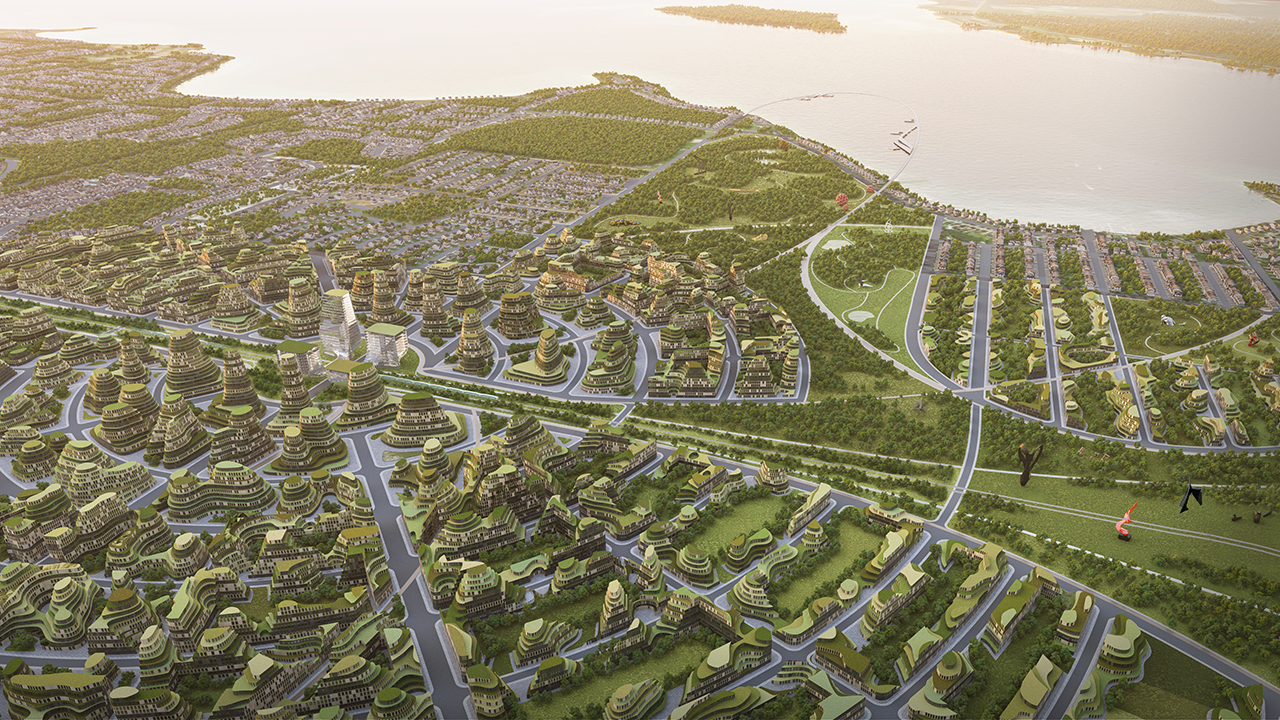 Arial rendering of the Orbit, image by Norm Li, courtesy of the Town of Innisfil.

The Orbit also uses all manner of hybrid massing and building typologies, ranging in height from low-rise to high-rise. The plan does away with the typical suburban array of boxes and the typical urban tower-and-podium, instead opting for undulating, flowing, outside-of-the-box forms. Non-rectilinear massing and courtyard typologies introduce open spaces into the built form, while building heights illustrated in the images are arranged in a gradient that peaks at the transit node. 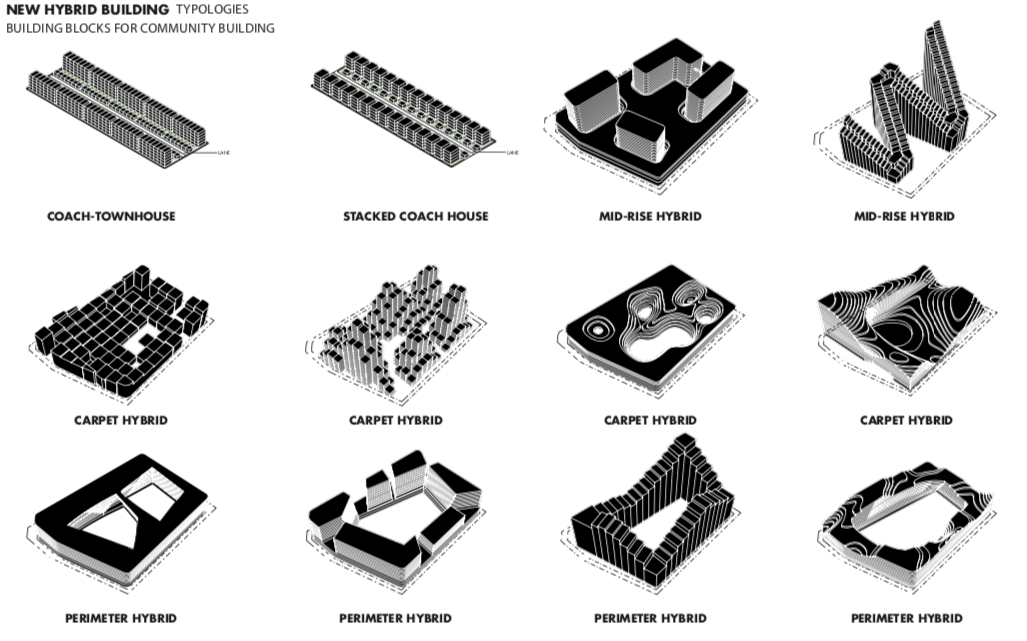 Conceptual building typologies, image courtesy of the Town of Innisfil.

At the centre of the Orbit is the transit node, the first component of the master plan that will start the build out with a bang. The design team is proposing to build a very urban condition in a very rural setting: rather than Metrolinx's typical rural condition of an isolated train platform surrounded by parking lots, PARTISANS is proposing to move the station slightly south to be centred below Sixth Line, with a four-tower development built over top of the station. Connections to the station would be from street level and through the buildings, which would span across the rail corridor. 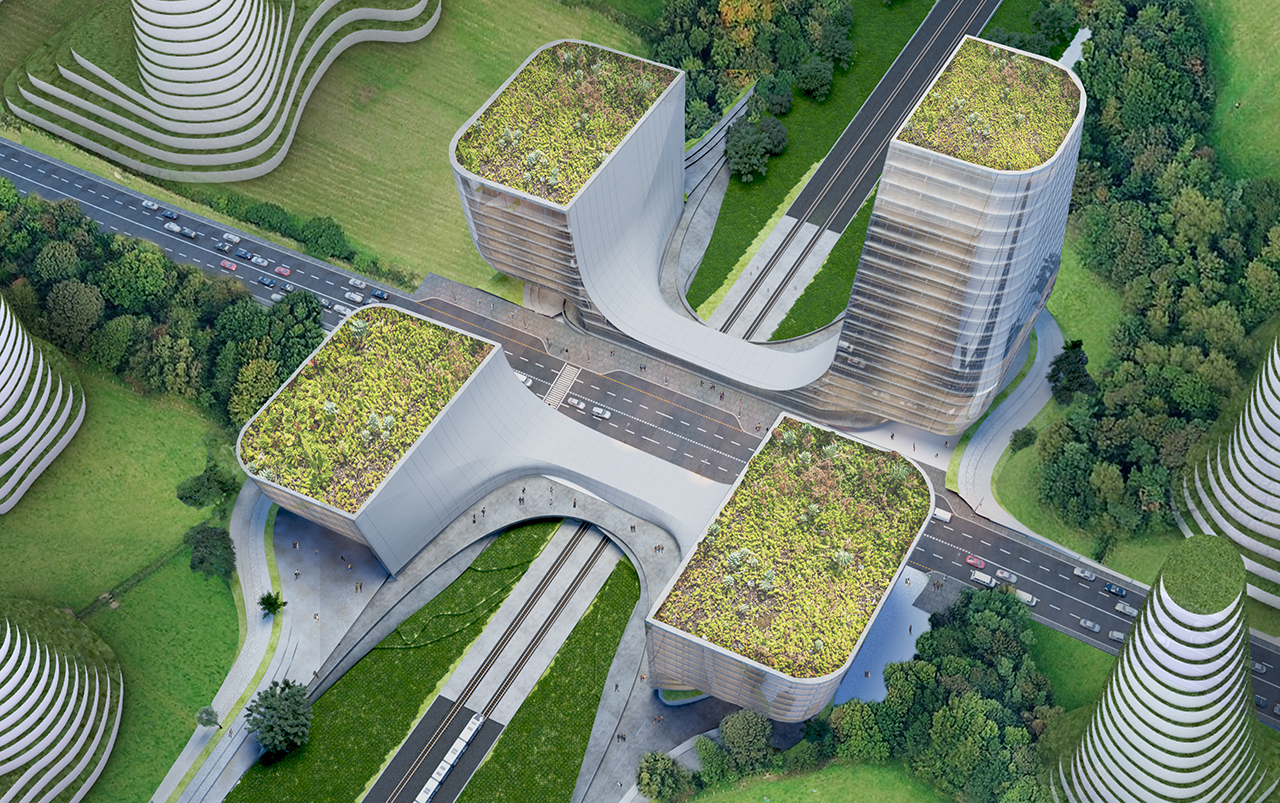 The curving buildings at the transit node are envisioned as mixed use, containing office and retail uses on the lower levels with residential above. The buildings are no doubt intended to set the tone for the developments to follow, making a bold statement in the middle of sprawling southern Ontario farmland.

The master plan targets the tech industry as the main driver of the workforce, and also touches upon implementing a smart city, making reference to "a fast, secure fibre-optic network woven throughout the community’s sidewalks, streets, buildings and more, designed to support innovation from local community members and entrepreneurs, while being governed by the appropriate privacy protection policies". This statement is not elaborated upon further, but the intent appears to indicate that the Orbit will be a smart city, similar to Sidewalk Labs' controversial Quayside project in Toronto. 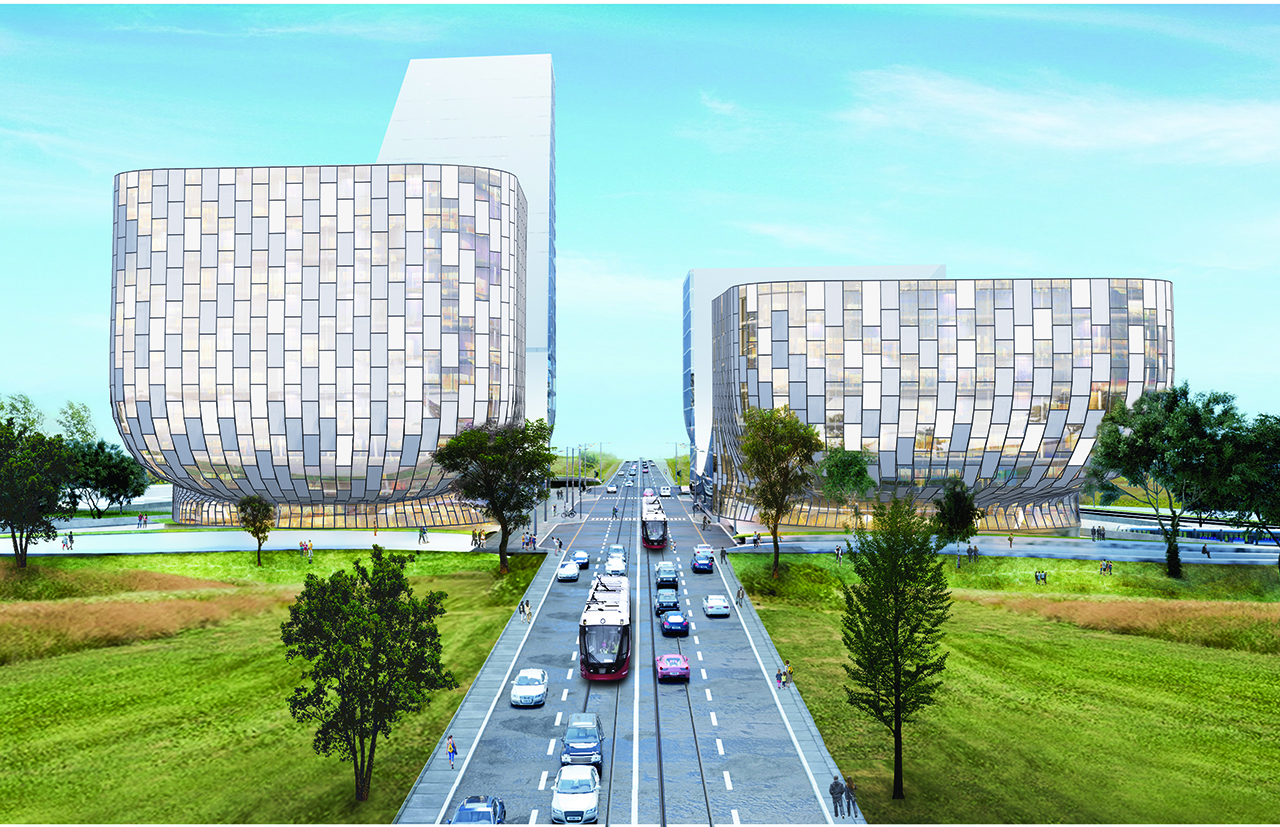 Despite its edgy thinking and bold proposals, the master plan has the full support of its local government. Innisfil's Council unanimously voted to approve the plan Wednesday evening, with the Mayor enthusiastically declaring after the vote, "We're going into orbit!".

The master plan is very high-level and aspirational, laying out a vision for what the new community could become, and does not delve into details or offer an implementation plan beyond the preliminary phasing strategy. The plan is also very much contingent on the construction of the Innisfil GO Station, which is scheduled for completion sometime between 2022 and 2025. 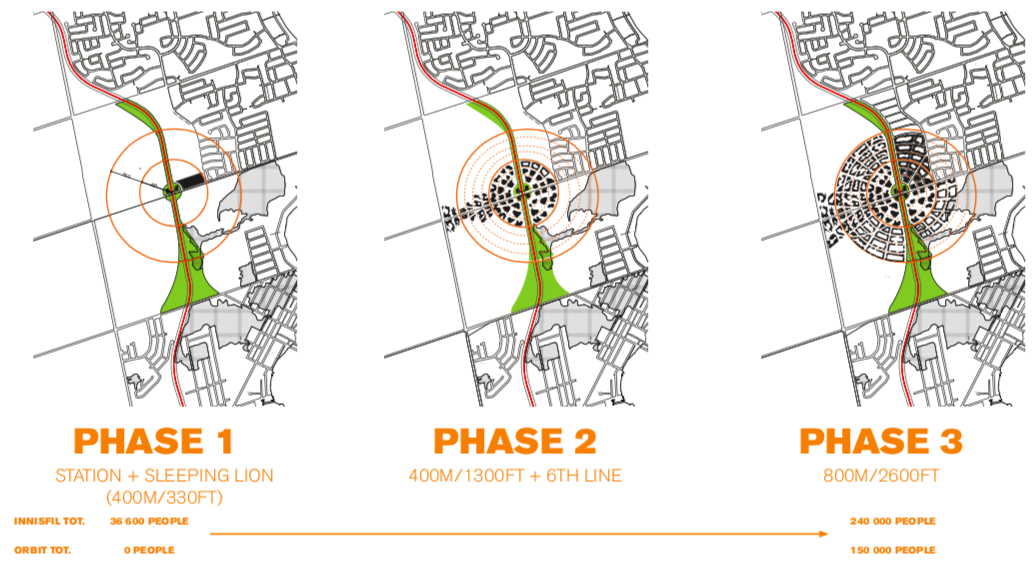 Preliminary phasing strategy, image courtesy of the Town of Innisfil.

The Orbit is, however, chock full of ideas that look to establish a new urban form that fights sprawl but preserves the desirable aspects of rural living. If these ideas are tested, implemented, and successful, Innisfil could perhaps be home to the city of the future.

Want to get involved in the discussion? Please leave a comment in the space provided on this page.