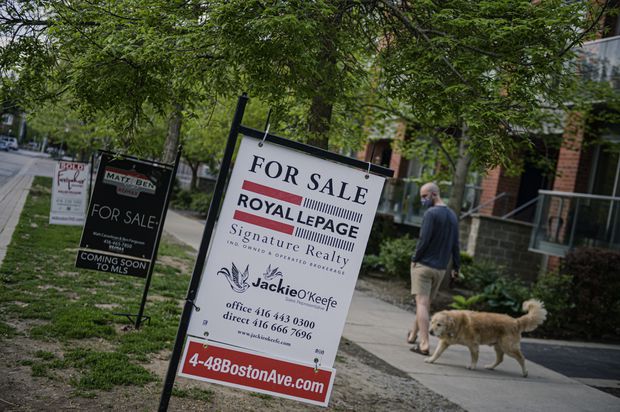 The Canada Mortgage and Housing Corp. is lowering the required credit score and loosening other measurements that ensure homeowners have enough income to pay their mortgages.

Canada Mortgage and Housing Corp. is making it easier to get federal mortgage insurance, reversing tougher rules that were imposed a year ago.

The federal housing agency admitted to making a costly mistake in unilaterally tightening its requirements last year, acknowledging it lost market share to competitors as a result.

“We are taking this action because our July, 2020, underwriting changes were not as effective as we had anticipated and we incurred the cost of a decline in our market share,” the CMHC said in an announcement.

Effective Monday, the mortgage insurer is lowering the required credit score and loosening other measurements that ensure homeowners have enough income to pay their mortgages and other debts.

Major lenders require mortgage insurance from the CMHC or a private-sector insurer if a borrower makes a down payment of less than 20 per cent of the purchase price of a home.

Under the new rules, borrowers need a minimum credit score of 600 instead of 680 to qualify for the CMHC’s mortgage insurance, and can have a higher ratio of expenses relative to their income.

The rule reversal comes at a time when mortgage demand has spiked and after the Bank of Canada warned about the risks of highly indebted households taking on more debt. But it may not have an impact on home prices.

When the CMHC imposed the stricter rules last July, the agency thought it would protect homebuyers, reduce taxpayer risk and curb excessive homebuyer demand that was fuelling skyrocketing prices. But while the quality of the CMHC’s portfolio improved, the agency lost market share to other private-sector insurers and its actions did not slow demand. The average home price in Canada is now 38 per cent higher than a year ago, according to the Canadian Real Estate Association.

Bank of Montreal chief economist Douglas Porter said it is not obvious that the CMHC’s reversal alone “will significantly stoke the market, or make the financial system less sound, as the business was likely being taken up by the private insurers.”

Benjamin Tal, deputy chief economist at CIBC World Markets, said the CHMC’s reversal is “no game changer by any stretch of the imagination” for Canada’s heated housing sector.

“It’s just a market-share play with no impact on the size of the insured pie, since the competition didn’t change the rules,” he said.

The housing agency came under harsh criticism from lenders and the mortgage industry when it imposed its new standards in 2020.

The CMHC had expected the private insurers to follow its lead but they did not. Instead, lenders started sending business to the private insurers, triggering then-CMHC head Evan Siddall to reprimand the banks and other lenders for not supporting the CMHC.

Since last July, the CMHC’s share of the mortgage insurance market has dropped precipitously, according to a research note from Royal Bank of Canada. The bank said the CMHC’s market share was between 45 per cent and 50 per cent prepandemic but slipped to 23 per cent by earlier this year. In contrast, Sagen’s market share climbed to 44 per cent and Canada Guaranty’s to 33 per cent, according to the RBC note.

“I think most of the market-share gains the two private insurers made over the last year will remain,” said Dan Eisner, CEO of Calgary-based mortgage brokerage True North Mortgage. “Borrowers very rarely choose which insurer gets used. The lenders make that call.”

Mortgage broker Robert McLister agreed that the private insurers’ decision to rebuff the CMHC’s policy earned them loyalty from lenders. “There’s some degree of market share that CMHC may not get back for years, if ever,” said Mr. McLister, who is editor at Rates.ca.